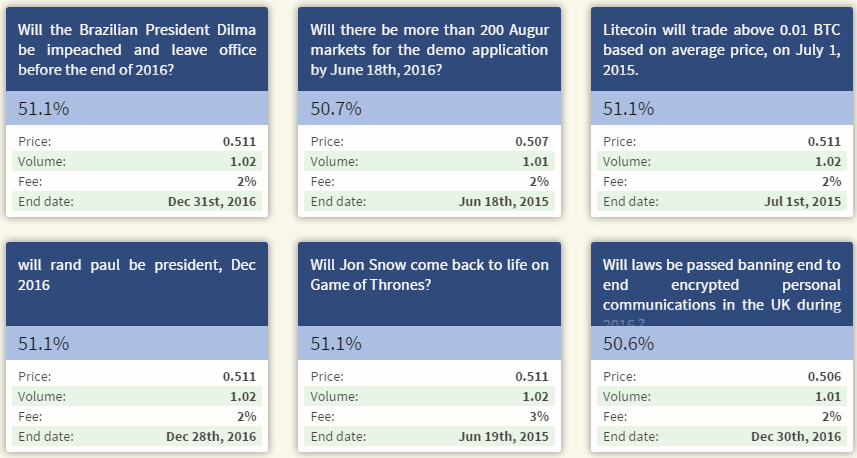 Augur, the decentralized prediction market system built around the truthcoin whitepaper, has officially launched its alpha on Ethereum Testnet. The alpha allows users to perform basic functions that are expected in the final product, including adding a new prediction market and betting on existing ones. Since Ethereum is yet to launch its final version, this was built on the Etherum Testnet instead.

Ethereum is expected to launch sometime next month, and is already in the final stages of testing. Ethereum, founded by Vitalik Buterin, raised $18 million in its initial crowdfunding platform, which was the second largest crowdsale recorded until then, trailing only Star Citizen, a video game. It has been the most successful crowdfunding in the cryptocurrency space.

Prediction markets tap into the wisdom of the crowds to predict the probabilities of future events. It is important to give the participants an economic incentive to participate, namely they get real money if they are right (as opposed to passive surveys and paying a flat-fee for user input).

Prediction markets were previously illegal in the United States, and therefore a lot of research in this area is only now coming to the forefront as researchers, scientists and social scientists realize the prediction powers of these markets for certain areas. Prediction markets were popularized by Intrade, a UK-based company, which is no longer operational. However, the site, which was very popular at one point of time, was credited with predicting election races to within a percentage point.

Today, several companies are using prediction markets, internally and externally, to understand their markets and users better. For instance, Estimize, a company that crowdsources financial data, has done better than most Wall Street analysts when it comes to understanding corporate earnings, using predictions from ‘amateurs’. Companies from Google to Ford have been known to run prediction markets internally, to understand their products and how they might perform in the outside world.

Augur is built using the principles and concepts laid out in the truthcoin whitepaper. The author of this whitepaper, Paul Sztorc, is an adviser to Augur. The Augur whitepaper is written by Dr. Jack Peterson & Joseph Krug, co-founders of Augur.

There are centralized solutions for prediction markets today that use Bitcoin, such as Predictitious. However, these suffer from the same old problems known to us – countless Bitcoin prediction markets have closed down over the years, vanishing with the users’ money. They can also easily be pressured to close down by powerful actors.

Augur decentralizes prediction markets and therefore makes it secured by the mathematics and economics of cryptocurrencies instead of trusting central institutions or human actors.

The Idea of Decentralized Oracle

One of the major achievements of Augur/Truthcoin is the idea of a decentralized oracle. This is perhaps the hardest part to get right in a decentralized prediction marketplace. The oracle is simply an entity that answers a yes or no to a question posed to it, which is then used to resolve the bet. In current human-curated prediction markets, the moderators or admins are the final decision authority on resolving bets. However, this system is easily corruptible.

Augur does something quite clever – it builds out incentives for people to vote the ‘right’ way, along with a majority of the people, so you’re rewarded for honestly (unless of course if the majority are dishonest, and can collude), and also incentivized to cast your vote on all event resolutions that you’re able to. This, in my mind, is the key feature of Augur and hopefully the system isn’t easy to game – you never know unless it’s tested out there in the wild with all the human greed and emotion.

Augur is a great idea and the startup has some very talented people working on it. We all look forward to how the project unfolds in the coming months.