Bitcoin ad networks are great to advertise Bitcoin businesses that want to reach out to the Bitcoin community and for publishers to make money from their Bitcoin-based websites. Bitcoin and cryptocurrency is still a very niche area of technology and finance, and as such, if you want to run a business in this field, it might be hard to reach the targeted audience. Luckily, there are some good Bitcoin ad networks out there that can help you reach the Bitcoin and cryptocurrency communities. These are also good for publishers who run websites in the Bitcoin niche, and have a decent sized audience.

This is one of the oldest ad networks specifically in the Bitcoin space. The project started in Bitcointalk forums back in 2011, and is still going pretty strong. Anonymous Ads is also one of the only good Pay-Per-Impression (CPM) Bitcoin ad networks out there. This is very good for both companies and publishers. It allows fair amount of targeting based on niches, and the websites themselves are tagged manually after an editorial review, so you can be sure that your ad is delivered to websites in specific areas only, such as Bitcoin and News. The site also provides a lot of network statistics that you can use to estimate costs. For publishers, anonymous ads pays out automatically as long as your daily balance is above 0.1mBTC. Anonymous ads network is recommended for smaller startups and services that don’t have a ton of marketing budget, but still want to get enough brand recognition in the community.

This is one the few mainstream ad networks that has a dedicated Bitcoin portal for advertisers, so they can reach out to the larger publishers. BuySellAds is recommended for more ‘mainstream startups’ that have enough money to spend on an intelligent and well targeted marketing campaign BuySellAds is quite selective in its process of approving websites and blogs, so the quality is usually higher. This also comes at a price of course – you’ll probably pay higher here than with anonymous ads or other PPC ad networks in the Bitcoin ad networks space. Advertisers can browse through the inventory, in this case all the Bitcoin related websites that have inventory with BSA and select the ones that appeal to them. Interestingly, BuySellAds announced in September 2014 that they will begin accepting Bitcoin payments, so you’ll be helping out the Bitcoin ecosystem by working with them. An added benefit of BSA is that you can use the same platform and reach more mainstream publications as well.

As of February 2016, BuySellAds works with 16 publishers in the Bitcoin space, including such common names as CoinDesk and BitcoinAliens.

CoinURL is one of the oldest pay-per-click (PPC) Bitcoin ad networks out there. Many advertisers prefer pay per click over pay per view, and if this describes you, CoinURL is a perfect place to advertise your business. This is recommended for smaller shops and ventures where you want to reach the community for a few cents per visit. Also, its look and feel is very similar to Google Adsense.

From a publisher perspective, CoinURL delivers highly targeted ads from the Bitcoin and cryptocurrency companies, and therefore gels nicer with the content theme than more mainstream ad networks like Google Adsense. In my experience, Adsense has a far higher pay per click, but the number of clicks are also lower. CoinURL can provide genuine value to the readers, since the businesses are targeted towards Bitcoin. 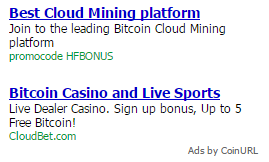 BitMedia is a relatively newer Bitcoin ad network, based on pay-per-click (PPC). It is quite similar to CoinURL, so perhaps it is best to try them out in parallel and see which ones provide the best conversions for you. They aren’t a fly-by-night ad network, and raised $100,000 for their product.

They seem to have different sources of ad inventory, and BitMedia is fairly selective in terms of allowing websites to join the network. They have a fairly decent ad-space inventory. Their advertisers too are mostly in the Bitcoin and cryptocurrency space, so the ads work better with Bitcoin and cryptocurrency related content. The ads look like regular banners, with a tiny ‘BM’ on the right hand top corner, similar to what Google Adsense does. 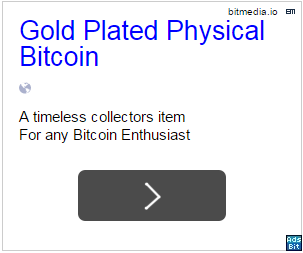 CoreMedia is a fast-growing Bitcoin-based ad network. You can choose from a wide variety of publishers in a catalog, and publishers can see all the advertisers on the network as well. Thus CoreMedia provides a very transparent experience to both sides. Advertisers can also see the minimum rates on publisher sites, and also choose different categories, like faucets, blogs, news, etc.

BlockAdz is a relatively new Bitcoin ad network but is growing fast. It is a pay-per-impression (PPM) ad network, as opposed to BitMedia and CoinURL which are pay-per-click (PPC).

From an advertiser point of view, BlockAdz are instantaneous and anonymous. These are great features to have, and provide additional value to the advertisers. Such a system then indirectly helps the publishers as well, since it would push prices up on limited inventory. As for this writing, BlockAdz has generated almost 200 million impressions and 38,000 clicks. Considering the fairly small ecosystem, this is worth taking a look.

Crypto Media Hub is owned and run by Tatiana Moroz, an artist and a long-time member of the Bitcoin community. It is more than just a banner-ad service, but instead offers a much fuller advertising and marketing solutions tailored towards Bitcoin businesses. This route is advisable for startups that have enough capital or are backed by venture capital funds and want to reach a wider Bitcoin audience. They claim a huge network of publisher sites in addition to several value-added marketing services.

BitTeaser is a paid-to-click type of advertising that integrates all the nice features (for webmasters and publishers) in one place. It allows simple registration and creation of ad campaigns, and you’re charged in a PPC (pay-per-click) manner. An interesting addition to the regular ad model is that it allows advertisers (and also publishers) to publish an article within their platform to promote your business – sort of a native advertising type campaign but the articles reside on their site instead. In addition, they have banners on this article, and share their revenue from these articles with the person who submitted it. If you’re a new business, this is a quick way to get a backlink to your site from a Bitcoin/crypto related website.

Mellow Ads is quite popular with a lot of faucet sites, which seem to get a good amount of traffic. If you’re looking for cheap traffic – millions of impressions at a reasonable price, mellow ads should be near the top of the list. It allows you to see exactly what publishers you can purchase clicks or impressions from. It is both Paid to Click (PPC) and pay per impression (CPM), depending on what you’re interested in. It’s becoming more prominent of late, and lots of sites seem to be using Mellow Ads. Their rates are low, so publishers are paid well too, which is always a plus. They are relatively new, however.

Cointelegraph is making a name for itself in the Bitcoin content space, competing even with heavyweights like CoinDesk at times. They have also formed an ad network where they partner with other websites out there in the Bitcoin and cryptocurrency space, and your ad is then displayed on this whole network. A lot of Bitcoin companies use this route to reach out the Bitcoin community, and this is worth exploring further if you’re a serious business in this niche and have a marketing budget.

In addition to banner advertising, since most of these sites are content-based, there are other forms of advertising that you can experiment with, from a contest or giveaway to social media campaign or a sponsored quiz.

For advertisers, there are other ways to reach out the Bitcoin community than through Bitcoin ad networks. These are localized in scope, but still get a lot of eyeballs.

Note: If you want even more resources, you can search a tool like Thalamus for ‘Bitcoin’ and find additional sites.

Paid to click advertising is another way to promote a Bitcoin business, or any other business, for cheap. The conversions through this route are generally not very favorable, and they are generally not very reputable, so paid to click advertising is not advisable for the more serious Bitcoin businesses. However, for smaller ventures and projects, this can be an option worth considering.

If you want to use Bitcoin paid to click advertising, some of the best sites in this niche are Bitter, BitsForClicks, BTCClicks, , Ads4BTC.