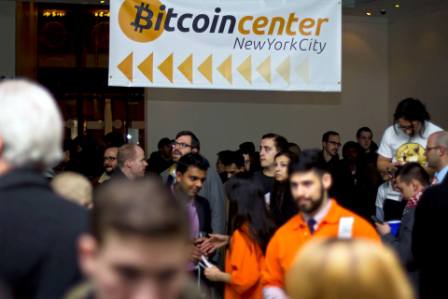 The Bitcoin Center NYC (Twitter – BitcoinCenterNY) is a fairly recent phenomenon but has quickly caught up to the Bitcoin community of New York. New York was one of the earliest cities to take on Bitcoin in a big way, and the whole idea and concept of Satoshi Square Meetup originated in the city. Now, the Bitcoin Center is trying to take it to the next level.

The center opened on the 1st of January 2014, so it’s just into its third month and already doing some pretty incredible things.

One great appeal of the Bitcoin Center is its location – it is located right next to the New York stock exchange on 40 Broad Street. It is a really nice space with a lot of history associated with the whole area, in terms of the financial and securities industry. No matter the current state of the financial industry today, it was a highly innovative industry back in the day at least, and the heart of it all was in Downtown Manhattan right around where the Bitcoin Center now stands today.

Finally, they have a great event planned for the next week, on Monday, February 17th and Tuesday, February 18th in the evening. If you’re a Bitcoin enthusiast (or not!) and in New York, you should definitely consider attending.

On Monday, the event is pitched to be “World’s Largest, and most popular Bitcoin live outcry trading pit”. This is supposed to have trading in Bitcoin and Dogecoin for US Dollars. With all the recent problems with Bitcoin exchanges, there is a lot of opportunity for face-to-face trading of Bitcoin. Don’t forget your computers/smartphones or at least the QR codes of your wallet addresses, so you can buy (or sell) some crypto-currencies!

In addition, Jeffrey Tucker is supposed to attend the event (he was also the organizer of the Crypto Currency Conference in Atlanta last year). Besides, it is always nice to network and mingle with fellow Bitcoin enthusiasts.

If you’re in New York, shoot us a message. We definitely plan to attend this event, and hopefully provide some coverage.