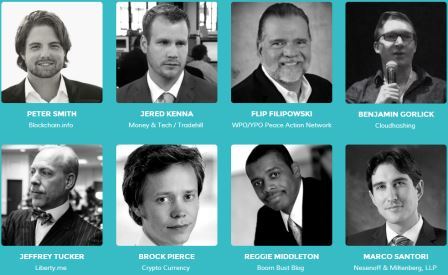 The North American Bitcoin Conference is coming to Chicago on July 19th and July 20th 2014. This is the second North American Bitcoin Conference, the first one being held in Miami. Just like in Miami, the conference promises an exciting ‘pre-party’. Also, remember that Bitcoin has grown a lot in one year, and the conference in Chicago will probably attract a much larger crowd and audience.

This list of speakers and panelists is impressive, and is a nice mix of Bitcoin businesses, speakers and libertarians. The speaker list reminds me of the Crypto Currency Convention in Atlanta in 2013, which also had a lot of philosophical and economic speakers, as opposed to just Bitcoin businesses (which is usually the case at Inside Bitcoins conferences). There will be two speaker tracks, since there are so many speakers to accommodate!

I think the speakers and panelists have a lot diversity, and it would be a very interesting meeting place for people in the Bitcoin community. Bitcoin conferences are a great way to meet others in the community and also get to absorb some of the best ideas from the people involved with crypto currencies.

This is also the first Bitcoin conference in Chicago that I am aware of (correct me if I am wrong), so it should be interesting to see if this attracts enough attention and people in the midwest of United States can attend. Chicago happens to be an important city, with upcoming tech and financial industries (not as evolved as New York, but still important enough, historically and for the future).

Tickets are $275 for the entire event, or $225 for a single day pass. Go grab your tickets today!

If you’re attending this conference, let me know in the comments and we can probably meet up.