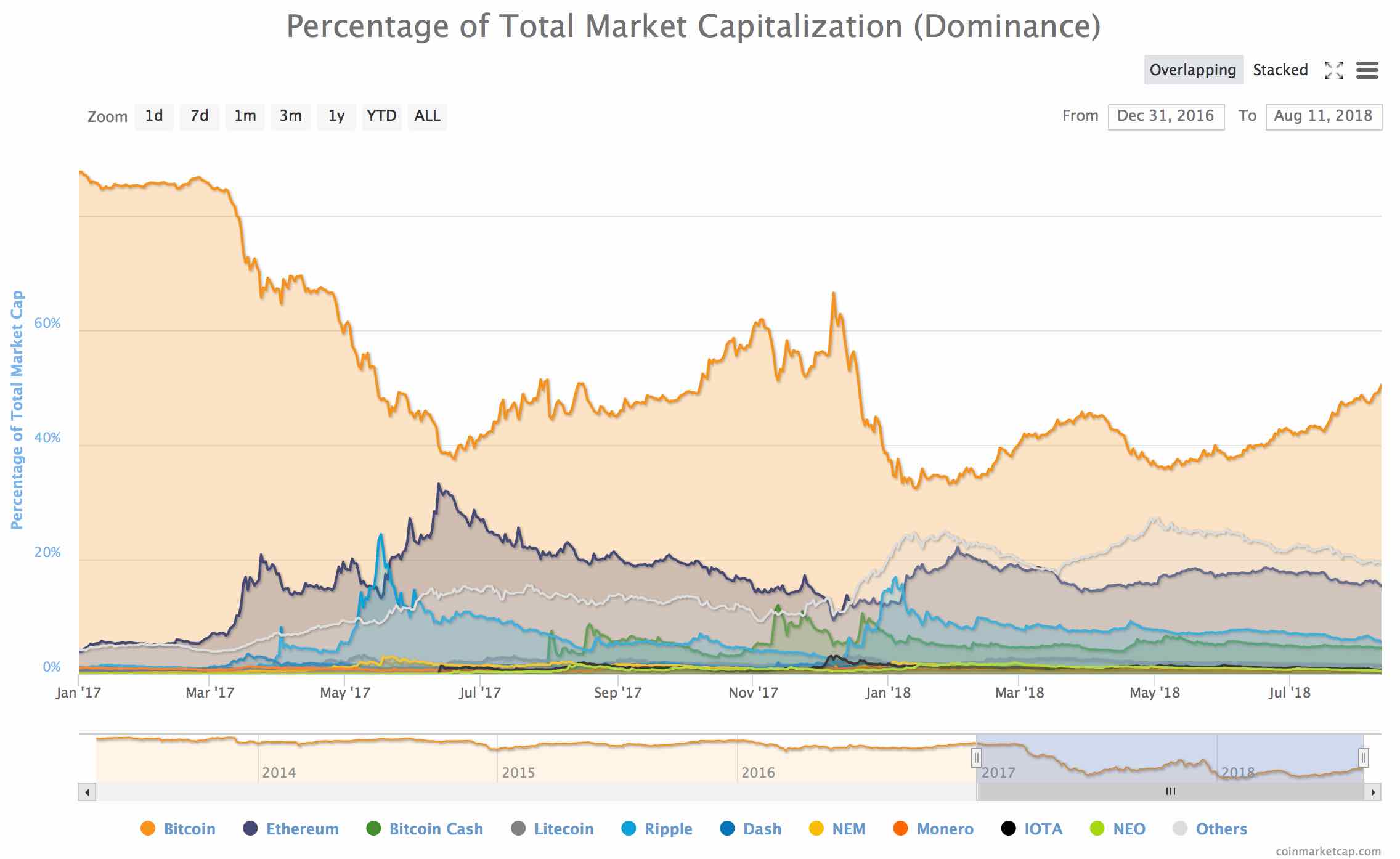 In a recurrence of history not repeating but rhyming, as the crypto bear market of 2018 deepens, the Bitcoin dominance index has been on the rise. Today, for the first time in 2018, it has passed the 50% mark. Based on historical trends, during the exuberance of a bull market, ‘altcoins’ rally relative to Bitcoin. During the bear markets, however, Bitcoin takes away what it gives during the bull markets, i.e. the relative ‘altcoin’ prices fall with respect to Bitcoin.

The Bitcoin dominance index, which measures the relative weight of Bitcoin in the full tradable basket of cryptocurrencies, has crossed the 50% mark, an important psychological level but otherwise without fundamental merit. It should also be noted that today there are an order of magnitude more cryptos in the market than even 2 years ago, so Bitcoin retaining 50% of the entire market even as new entrants enter this market is impressive.

Bitcoin dominance peaked around 80% before the bull market of 2017, when it dropped to as low as 35%, before recovering. This has usually been the case with Bitcoin and the crypto markets when the relative weight of Bitcoin falls during a bull market. The altcoins tend to be more volatile than Bitcoin.

This was also the time of the ‘flippening‘ narrative put forth by the Ethereum community that the Ether market capitalization would exceed that of Ethereum very soon. That was not to come in 2017. Even prominent venture capitalists who have invested in the space for a few years, like Fred Wilson, were completely wrong on their prediction of the flippening. It is a common human bias to project a recent trend into the future, and recency bias makes us weigh recent data more than older data. Needless to say, even prominent investors are not immune to these, and seldom correct their world view distorted by these biases.

The other thing for crypto investors to keep in mind is that the value of different ‘altcoins’ today come from very different sources, and thus it is not always fair to compare Bitcoin to them. For example, the value of a coin like Golem primarily comes from the usage of its network for compute resources. This is not true for Bitcoin. Bitcoin is more of a true store of value that is converting to a convenient medium of exchange via innovations like the lightning network.

This was different when the best known altcoins were similar to Bitcoin, such as Litecoin. Today, the crypto market is much more diverse in its offerings.

The value of Bitcoin is affected also by the broader economy and market, such as providing shelter to ordinary people in countries like Venezuela, Iran, and Turkey where inflation is rampant. Bitcoin provides a way for these people to store their wealth in a non-depretiating asset or work for foreign entities and capture some of the value they create.