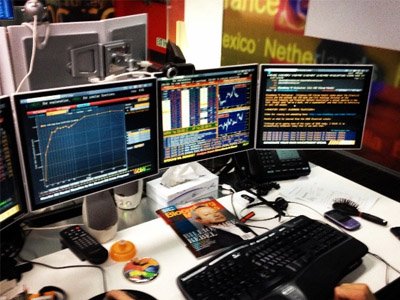 Bitcoin ticker finally arrives on the famed Bloomberg terminal, which is central to all data on Wall Street and beyond. This has only been released internally so far to the employees, perhaps for testing. Pricing sources include MtGox and TradeHill.

This was overheard at the Satoshi Square last Monday coming from an employee at Bloomberg and our brilliant team at BTC Geek has now confirmed the same. Bloomberg employees can see the Bitcoin ticker under {XBT Crncy<GO>} on their Bloomberg terminal and look up it’s pricing.

Finally, Bitcoin is gaining some legitimacy in the secretive world of finance. It is well documented that there was a lot of interest in Bitcoin from the traders at banks like Goldman Sachs and Morgan Stanley. That doesn’t lend any credibility to Bitcoin at all, especially with the kind of reputation these banks and traders enjoy among the masses. However, this being on Bloomberg is big news because Bloomberg isn’t in it for the money – they don’t trade themselves. However, if Bloomberg sees this as providing some form of information to its clients, it means people inside the financial world are serious about Bitcoin as a currency.

The Bitcoin currency isn’t yet accessible to Bloomberg’s customers. However, this is accessible to all employees. Bloomberg might be taking precautions for this, after the Greek Drachma Debacle where it accidentally released internal testing of Greek’s Euro exit to all of its customers. It is also interesting to note that the Greek Drachma was labelled XGD and Bitcoin is now labeled XBT as the ticker on Bloomberg.

To see the Bitcoin Ticker and price on Bloomberg (only if you’re an employee currently):
1. On the main bar in the terminal, type XBT followed by the F11 key (the key for currency on a standard Bloomberg keyboard). It should look like XBT Crncy. Then press Enter. You’ll be directed to a price on top of the page and some links.
2. If you type GP in the same bar and Enter, then you will see the Bloomberg graph of the price of Bitcoin.
3. If you type ALLQ in the same bar and Enter, then you’ll see the pricing sources that Bloomberg has for Bitcoin – MtGox and TradeHill. If you select one or the other, the price and graph change accordingly.

What are your thoughts on this? Do you think Bitcoin appearing on Bloomberg terminal lends additional credibility to Bitcoin?

Update: Here’s proof of the same.

Image removed at the request of Bloomberg