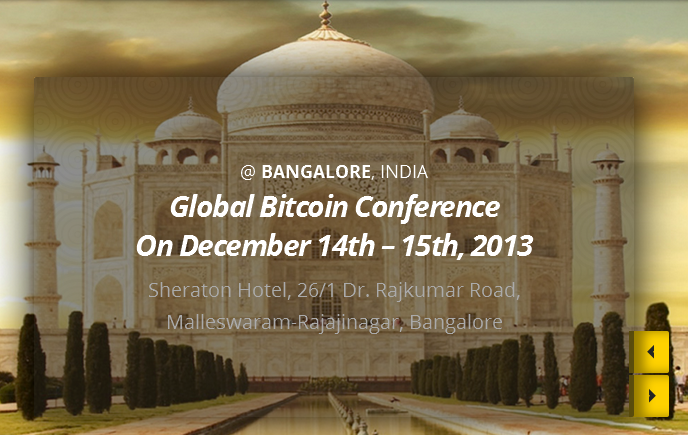 The first Bitcoin conference in India is going to take place on December 14th and 15th in the city of Bangalore, the 5th largest city in India and home to most of the multi-national software companies in India. This should be an interesting conference for those in India and people in the Bitcoin space in general.

Bitcoin exploded in China in the last two months, thanks to a number of factors. However, India, the second most populous country after China, also holds a lot of potential for Bitcoin, although the news out of the country has been pretty slow of late. I wrote an article back in August, Will Bitcoin Take Off in India and points I highlighted still hold true. Although India would probably not see as much trading frenzy as China, it has a very skilled software workforce that can actually contribute to the platform of Bitcoin itself, which is much more important than just the price vs. USD.

Bitcoin has several benefits it can offer to consumers and businesses in India, and conferences like these will only help spread the word and bring awareness in the community. It is also a very good way to go meet the people who are working on Bitcoin and related ideas in person, so you can be a part of the community as well. It is still in a nascent stage, and so getting in on the ground floor of the development should be a good start. I think come next year, there will be more such conferences in India – it’s too big a market to ignore Bitcoin completely.

BTC Geek is also happy to announce that we’ll have one of our team members go and cover this event, so we’ll publish a detailed blog post about the conference once it ends and also tweet during the event. You can follow us on Twitter @BTCGeek to stay updated on the conference details.

Drop us a line if you’re attending this conference.