Big news out of the Ripple community – the founder Jed has signed a PGP message stating he would sell his entire XRP stake (several billions of XRP) in the coming weeks. This was his exact message:

Hi Everyone,
I started working on ripple in the summer of 2011. I soon hired Arthur and David to help me. In 2012, I met Chris Larsen. He joined us about 5 months before ripple was launched. Chris, Arthur and I kept 20 billion XRP, of which 9 billion were mine. We gave the remaining 80 billion to OpenCoin.
I have given away and donated some of my 9 billion XRP to charities such as MIRI, Literacy Bridge, Give Directly, Mission Bit and others. I plan to start selling all of my remaining XRP beginning in two weeks. Because I have immense respect for the community members and want to be transparent, I’m publicly announcing this before I start. So just fyi…. xrp sales incoming.
Thanks,
Jed.

This is a big development, obviously, and the information has been verified by the forum admin and by Jed sending 1 XRP from an address that holds 1.8 billion XRP.

Also interesting to note is that the announcement was made on XRPtalk and not on the official forum for XRP. This suggests a possible rift between Jed and the other members of the foundation/team.

Obviously, the market hasn’t been too kind to the price of XRP, and according to Coinmarketcap, XRP is now 7th, just below Dogecoin. 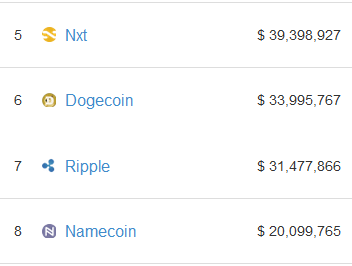 As with everything in the cryptocurrency space, speculation is rife about how or why this is being done and what the implications are. For instance, people have suggested that this was done to crash the price deliberately to buy up cheap XRP (my opinion: unlikely). However way you slice it, it has caused a big price crash in ripple, and it will probably remain volatile in the coming weeks.

This is a problem with pre-mined coins where a small percentage of people hold a disproportionately huge amount of coin. If the holders decide to dump, there is no recourse. Although I like the idea of Ripple, the distribution part could definitely have been done better. On the positive side, the Ripple community seems supportive of Jed and his decision. Like I said, watch out for that volatility in the markets. The incident is also sure to bring out more Ripple vs. Bitcoin debates.