Stellar is a platform for real-time cryptocurrency transactions. Stellar supports any currency, and also has its own decentralized exchange, where it is possible to trade assets.

History and the team

The Stellar platform was founded by Jed McCaleb in 2014. It was originally an offshoot of Ripple and ran on its protocol. The separation of Stellar came after serious accusations of Ripple completely centralizing the network. Indeed, most of the XRP tokens are owned by the creators, giving the cryptocurrency market a chance to be manipulated.

Stellar was launched in 2015. The developers position the platform as an analogue of a financial system – unlike bitcoin, which works only with cryptocurrency, Stellar is designed for transactions with any currency.

The nonprofit Stellar Development Foundation was created to fund the platform. It exists on donations and at the expense of leftover 30 billion XLM tokens, which over time will also enter the financial system.

Stellar uses its own protocol, the Stellar Consensus Protocol (SCP), which was the first real application of the Federated Byzantine Agreement (FDA) in practice. Stellar is not based on blockchain, but uses a distributed registry. Special quorums are used to check updates in the registry and enter new transactions. The creators claim that unlike PoW (proof-of-work), SCP is configurable, fast and efficient and helps achieve network consensus.

The Stellar network is considered a direct competitor to the Ripple network because they originally shared a protocol – Stellar split off after claims in Ripple Labs’ centralization. To avoid such a thing, Stellar’s developers keep only 5% of XLM tokens to pay off the network’s internal costs, while Ripple holds about 60% of all tokens. Also, unlike the Stellar network, a third-party user cannot become part of Ripple without the approval of Ripple Labs, which again raises suspicions of centralization.

Since Stellar is a platform for financial transactions, there are several usage scenarios:

Stellar is largely for developers, and has a support function so that you can easily understand the system and start helping the project right away.

What is the Stellar Lumen (XLM)?

Stellar Lumen (XLM) is an internal token of the Stellar platform. According to the developers’ idea, it is required to have at least a small amount of Lumen in each account – 1 XLM is enough. Commissions for transactions within the network are 0.00001 XLM regardless of the amount. 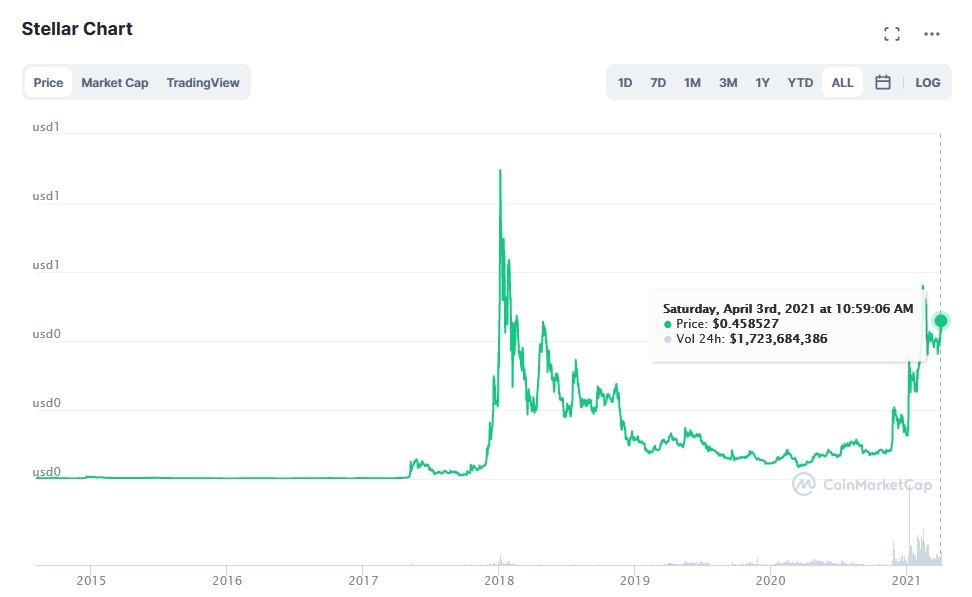 How to buy and where to store XLM

You cannot buy Stellar Lumens tokens for fiat money directly, but you can do it on cryptocurrency exchanges like Poloniex, Binance, Bittrex, and Kraken. After buying Lumens on an exchange, withdraw them to your wallet. Otherwise your funds can be lost due to hacking, theft, and the bankruptcy of the exchange itself.

If you have nowhere to store XLM, we advise you to create an online wallet on this service. This option is convenient because it allows you to do without installing any additional software on your PC, and you can start working with Lumens in just 1 minute.

You can also choose one of the options presented on the official website of Stellar:

In July 2020, Samsung announced Stellar support for Samsung Galaxy smartphones. Smartphone owners can now securely store Stellar wallet private keys right on their phone. App developers will be able to take advantage of the opportunities offered by the Stellar network. Such deals are extremely good for the company’s reputation. The partnership can attract new users for both Samsung and Stellar.

In December 2020, it became known about the launch on the Stellar blockchain by Germany’s oldest bank, Bankhaus von der Neudt, of a stabelcoin backed by euros. According to the bank’s CEO, the choice of blockchain was dictated by the ease of issuing and managing assets online.

In general, the interest in the Stellar platform from companies, developers and users is constantly growing, which opens up excellent prospects for it. According to many experts, Stellar Lumen has a high chance of renewing its historical high in late 2021 or early 2022.

Stellar is a cryptocurrency that aims to do more than create decentralized digital money. The developers’ ambitious intentions are so far on track, and many large firms are cooperating with the company. At the same time, XLM token, which is a very promising cryptocurrency, is not lagging behind.