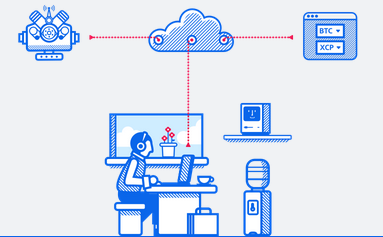 Looking for how to buy Counterparty? This guide will walk you through the process you need to get your hands on arguably the most promising Bitcoin 2.0 technology, Counterparty. Unlike many other protocols (Ethereum, BitShares, NXT, etc.) that also categorize in the Bitcoin 2.0 space, Counterparty is built on top of the Bitcoin blockchain itself, which provides it with all the security and safety afforded to the Bitcoin blockchain through the vast mining hashpower (and of course, the associated risks such as centralized mining) and ecosystem.

In order to create a fair distribution, the Counterparty developers had a window, during which anyone who sent Bitcoins to a specific unspendable address (no one knows the private key to this address, and therefore the funds are unspendable). People were rewarded in proportion to the number of Bitcoins sent to this address. This is unlike an IPO/ICO (Initial Public Offering/Initial Coin Offering) that’s so common in the cryptocurrency space, since the developers didn’t get any money from the public. All the Bitcoins just got lost in a black hole, so to speak.

Counterparty is a truly deflationary currency/token, in that there is no initial inflation (like in the case of Bitcoin, which runs at about 10% per year at the current mining rewards) and creating assets requires spending some Counterparty tokens, so the total supply is always dropping, although at a low rate right now. It is important to take adequate precautions while using online exchanges, and only trade on trusted exchanges. Also, don’t use an exchange as a wallet – after you buy Counterparty, transfer them over to your own Counterparty wallet and protect it adequately.

Bter: This is the biggest and most trusted exchange to buy Counterparty, and one that I personally use for all my Counterparty trades. It’s a Chinese exchange with robust volumes, low trade fees, and very prompt withdrawals and deposits. It’s the best way to buy Counterparty in my opinion. It offers two options – buying Counterparty through Bitcoin or Chinese Yuan. The XCP/CNY pair also has a fair amount of volume at Bter although usually less than XCP/BTC. It also offers a XCP/USD trading pair, but it is generally quite hard to get USD on to Bter exchange.

Poloniex: Poloniex has had a fairly good trading volume for Counterparty. It is a relatively new exchange that is yet to really prove itself in the battlefield (unlike Bter, which has been around for several years). It’s a good option to diversify how to buy Counterparty, but I would be cautious of putting too much money into Poloniex just yet.

MasterXchange: This was one of the older exchanges to add Counterparty, but the volume is very low, and therefore the spreads are high. You might get lucky hitting a low price, but this exchange cannot, in general, support a good volume buy.

Melotic: This is an upcoming exchange and fairly new, so it still has to prove itself. However, it looks promising so far, only listing the better altcoins instead of having hundreds of them. It already lists several other Bitcoin 2.0 coins and a few popular altcoins, but still remains very selective. They have a fair amount of trading volume, but nowhere close to Bter. Use this as another exchange to buy Counterparty instead of a primary source.

If you’re new to Bitcoin and cryptocurrencies, don’t own any Bitcoin, and don’t want to deal with all of this, just go through the following steps –

1. Register on Coinbase or Circle to buy Bitcoins in your account. You can link your bank account and buy Bitcoins. Both these companies have raised tens of millions of dollars and very trusted in the community. They won’t try to scam you outright.

2. Register an account on Bter. Go to Account > Balances > Deposit under BTC. This will give you a Bitcoin address to deposit Bitcoins to.

3. From your Coinbase or Circle account, send Bitcoin to this address generated by Bter. Wait for about 20-30 minutes for the Bitcoins to show up in your Bter account.

5. After the trade, withdraw your Counterparty to your own wallet, such as Counterwallet.