Coinbase, founded by Brian Armstrong and Fred Ehrsam in June 2012, has reached 3 million hosted wallets on its service. Coinbase is one of the most popular Bitcoin hosted wallet services, and recently became a popular Bitcoin exchange as well. The company also allows users to purchase Bitcoins directly with their local currencies and also helps merchants accept Bitcoin payments by giving them an option to convert the Bitcoins immediately into local fiat. 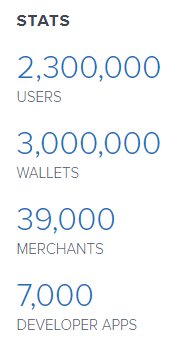 Coinbase also reported 2.3 million users, along with 3 million wallets. Each user is allows an unlimited number of Bitcoin wallets on the service. Transactions among Coinbase users are off-chain and not broadcast to the Bitcoin blockchain, thus making transactions from this user-set hard to predict.

Coinbase has also raised more money than any other startup in the Bitcoin space, with a cumulative funding of $106 million. Coinbase reached its 1 million user mark last year.

Coinbase has expanded to several countries throughout the world, after starting out exclusively for US based customers. Still, its growth hasn’t been as impressive as some might have predicted, with a steady increase in users and wallets instead of the ‘exponential growth’ that many were expecting. Part of the reason for a slower than expected growth has to do with the recent Bitcoin price stagnation, which has slowed the number of new users entering the ecosystem.