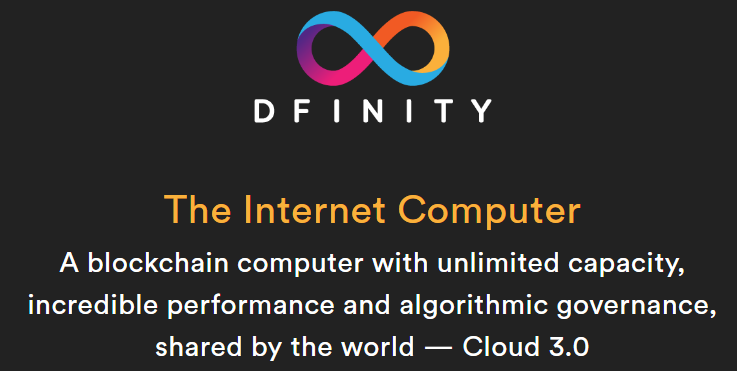 Dfinity, one of the most interesting crypto projects in recent times, announced that it is raising money from Andreessen Horowitz (A16Z), the famed Silicon Valley venture capitalist and Polychain Capital, perhaps the best known crypto hedge fund in the market today. Dfinity has raised $61 million in this round. Previously, Dfinity had raised 3.9 Million CHF (Swiss Frank) in its seed round around a year ago from regular backers (i.e. non-venture backed).

Although Dfinity uses buzzwords like Cloud 3.0 in describing what it does, the project is one of the very few respected protocol-level projects in the crypto space at the moment, amidst the ICO hype. The project itself is quite ambitious and wants to rethink how applications run on the web. Dfinity is aiming to break the holy trinity of ‘safety, security, scalability – pick two’ by promising all three. The team has made significant progress on the project since the seed round almost a year ago.

Venture rounds are not usually looked upon favorably by the crypto community, since they feel it is against democratic access. Venture capitalists almost always get favorable terms compared to everyone else, which also doesn’t appear fair to the communities in general. However, in this case, both A16Z and Polychain Capital are well known in the crypto communities as being able to provide a lot of value beyond just money. The hope is that the Dfinity team can get a lot of value out of these partnerships.

Dfinity and Polychain Capital have already announced a partnership to manage a venture fund for projects that would end up using the Dfinity compute infrastructure for their projects.

Dfinity completed its seed round in February 2017 just prior to the whole ICO mania of 2017. It raised 3.9 million CHF in the seed round from regular project backers (not venture investors). The team announced that it had $40 million when it converted everything to fiat money. With the $61 million raised in its venture round, the company has a total funding of $100 million so far.

The main ICO was supposed to have a hard cap of 20 million CHF back in 2017. However, as the market conditions have changed, that would be significantly undervaluing the project, with the speculators capturing the difference. Instead, the company, which doesn’t have any immediate funding needs after this venture round, is reconsidering its ICO plans. However, Dfinity has promised that the seed investors will get 24.72% of the Dfinity network tokens that will be created in the genesis block. This will keep the seed investors from being diluted, since it is very likely they will raise significantly more than 20 million CHF.

Dfinity has announced a first round ‘presale’ with strict KYC/AML requirements, and has cast doubts on a broader ‘second round’ ICO. If it takes place, the team wants to run it through regulated exchanges.

Dfinity pitches itself as a ‘blockchain computer’. It has many similarities with Ethereum, but its scope goes beyond what Ethereum does. Dfinity allows companies to run computing applications on a fully decentralized computing infrastructure without regards to using a lot of IT or datacenter staff to maintain those resources. It aims to make it extremely simple for developers to build and deploy complex applications.

Dfinity completed its seed ICO yesterday with a total amount raised at 3.9 million CHF. The project had a soft-cap for the ICO at 1 million CHF and an additional 24 hours from this time before close. This soft cap idea is a new one in crypto ICOs. At the end of the ICO, i.e. 24 hours after the soft cap was reached, the ICO closed with around 3.9 million CHF total raised. The soft cap of 1 million CHF was hit in only 75 minutes from the start of the Dfinity ICO.

An Interesting Way to ‘Cap’ the ICO

Dfinity tried an interesting way to cap the ICO. Instead of a hard cap, i.e. the ICO closes the moment the Ethereum contract receives the maximum amount of money defined in the contract, Dfinity opted for a ‘soft cap’. The soft cap was implemented as follows – the ICO closes 24 hours after the soft cap is reached. This has an advantage that investors don’t need to wake up at ungodly hours to meet a 15 minute ICO window, which happened with some hot tokens last year like the FirstBlood token. Such ‘insta-sale ICOs’ are bad for the project as they tend to concentrate the tokens in the hands of a few whales instead of distributing them widely to the community.

Of course, the flip side of this is that investors don’t really know the price of the token they are getting until the end of the ICO, which makes return calculations hard. For example, if investors place a risk-adjusted value of $2 million in this round, there is no way to know whether to invest or not, because the ICO might raise more or less than that amount. With a 24 hour window, it was at least mitigated though.

The team has promised up to 78% allocated to investors in this seed round, and a subsequent “main” round.

Dfinity has created some interesting ideas, most notably the Blockchain Nervous System. This allows the token holders to vote and change important economic parameters. It also is a back-stop against bad behavior, or bad bugs, like preventing potential The DAO type situations. If the majority decide, they can pretty much do anything, although proposals come at a cost. This has a very different dynamic to the ‘code is law’ principle followed by Bitcoin and Ethereum Classic. It is a softer version of that.

Although Dfinity claims not to compete with Ethereum, it offers a Turing complete language to write smart contracts and applications in. The technology developed with mutually benefit Ethereum and Dfinity, but there is also definitely a competitive element. Dfinity will provide value to the token holders by bringing in projects and apps being built on it, which would otherwise have been built on Ethereum, likely. Dfinity also believes that some of the technology being developed by the team will help Ethereum. Collaboration among crypto projects is always welcome as it moves the whole ecosystem forward.

Dfinity has made tremendous progress since we first wrote about the fundraise above. VCs like A16Z have been all over leading several rounds of funding for the company and foundation. A lot has changed in the crypto landscape in the last 4 years, and the rise of Ethereum and the ecosystem around it has been a gamechanger for a lot of potential applications of blockchains.

Dfinity still wants to differentiate itself from the Ethereum ecosystem. It has moved its marketing messaging from “Blockchain Nervous System” to “The Internet Computer”. Although several apps seem to be being built on it behind the scenes, we don’t know too many details. The Dfinity team has now promised to launch the network on 7 May 2021. See the official tweet below:

One question we get asked a lot from early supporters of Dfinity is how the ICO/pre-sale investors will be treated.

Here’s the answer from the team:

This was posted by Dominic Williams in April 2018. The “ICO” investors (ICO in scare quotes because after the bad practices of many ICO projects in 2017, no respectable project wants to use that phrase) are the “Seed fundraise contributors” who would get 24.72% of the Dfinity network. Given the private valuation of Dfinity is already in the billions of dollars, the seed investors should see a healthy return on their early bet on the team and project, even in BTC or ETH terms (hopefully).

Back of the envelope calculation is as follows:

~$4 million raised for ~25% of the network, which means seed investors got in at a valuation of ~$16 million.

Assuming a fully diluted valuation (FDV) of $1 billion, that is a return of 62.5x in USD terms.

We always calculate returns in BTC/ETH terms since that’s what crypto investors index to. So if you put in Ether into the Dfinity presale, then at around $4 billion fully diluted valuation, you should break even.

If you want to trade Dfinity at launch, make sure you have your Coinbase and Binance accounts ready. Given the scale of launch, it is likely that the largest exchanges will start listing Dfinity right away.

This was for its ‘seed’ round. Dfinity will have another round of funding in the future as well, as part of its ICO efforts. Due to the earlier stage of the seed funding (and thus a higher risk of investment), there is a bonus to invest in the seed round compared to the follow-on round.

Dfinity ICO is also unique in having a ‘soft cap’ on the amount of money raised instead of a hard cap or no cap.

In hard cap ICOs, the ICO ends whenever a certain threshold of funds is  reached. This presents problems if the ICO is ‘oversubscribed’ i.e. if many people want to invest in the ICO. For example, SingularDTV put a hard cap of $7.5 million on its ICO. However, it was sold out in under 15 minutes. This causes the token distribution to go to speculators more than the believers and early adopters of the project. This can be quite problematic when the purpose of the ICO is as much to create that initial set of users and early adopters as much as it is to raise money.

In no cap ICOs, there is only a time limit up to which an unlimited amount of funds can be raised. The biggest problem with this model is that investors don’t know how much the tokens they are buying are worth, because it depends on how much the total funds are going to be raised in the future. This can present situations like The DAO which would have been a worthy experiment at $5 million raised but not at $100 million raised.

Dfinity is structuring its ICO as a ‘soft cap’, which means they will allow 24 hours after the goal is reached as the cut-off. This will prevent ‘insta-ICO sellout’ situations like FirstBlood and SingularDTV tokens. Therefore the Dfinity ICO will still be open for the next 24 hours after reaching the 1 million CHF goal.

About Dfinity and the ICO Token

Dfinity is a project similar to Ethereum (although they say they don’t compete with Ethereum) in that it allows the execution and creation of arbitrary smart contracts. The biggest difference is that instead of the smart contract code being the ultimate authority (and having situations like The DAO when a bug in the contract code can cause a loss of funds), Dfinity has a group consensus process it is calling the Blockchain Nervous System (cheesy name). There are many limitations on using it, but it can be deployed for special situations that would prevent issues like The DAO.