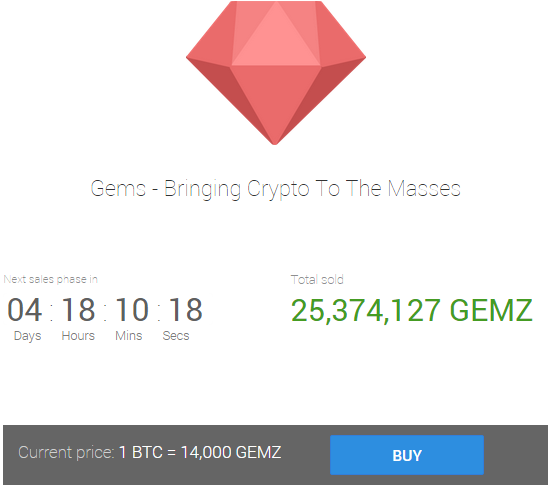 Gems, the social messaging application that is scheduled to launch at the end of December 2014 with an iOS messaging app, has raised about $500,000 so far in its crowdsale. Over half of all the presale tokens available have been sold out. Gems is using Koinify to raise money, which makes Gems the first application of the Koinify platform.

Koinify itself is built on top of the Counterparty protocol, and all presale tokens are traded on Counterparty. Koinify provides certain investor assurances, such as releasing the amount raised in stages, depending on the progress made by the project (Gems in this case) so far.Counterparty, of course, is built on top of the Bitcoin blockchain (yes, there are too many levels, but I think it’s a good sign – the ecosystem is maturing when the underlying mechanisms are abstracted away. In the future, I want to see the front-end expose just a Bank deposit type of information and the backend to handle everything, so the user doesn’t even need to know that she’s ultimately using the Bitcoin blockchain).

Gems is planning on building an application that is private by default, but users can enable ads and get paid in the Gems token. The servers and information is still centralized though, and it isn’t like some of the other messaging apps that are genuinely built around privacy where even the company cannot intercept users’ communication. How it pans out and performs in the real world is anyone’s guess, but the concept looks promising.

Even though Gems has raised over $500,000, it doesn’t have access to the funds immediately. They need to show progress first before funds are released. In this case, they need to follow the following roadmap:

If this seems fairly subjective, then yes, it is. There is a single judge who will decide whether these milestones have been met. In the case of Gems, it’s Adam Krellenstein, Counterparty’s chief scientist. The project seems promising overall, and there is a good amount of marketing hype surrounding the project already. Let’s hope the Gems team can deliver.

Crowdsales have become increasingly popular in the crypto world, and that has also meant that investors are shying away from it, considering the risks and the number of projects that die a natural death. There are of course some great examples of crowd-funded projects in this space, such as NXT (no matter how controversial the distribution turned out to be initially). There are also projects that are trading above their ‘IPO price’ but are yet to release full working products, such as MaidSafe and Storj. It remains to be seen whether Gems can sell out all of its tokens for the IPO.